What is Lichen Planus 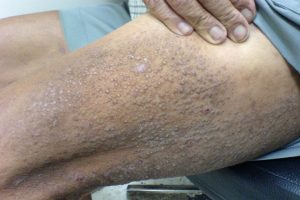 Lichen planus is a chronic intensely itchy skin rash caused by the abnormal deposit of amyloids (proteins) in the skin. The lesions mostly appear in the lower leg, particularly over the shin; however, in few instances, there can be lesions on thighs, lower limbs, forearms, and back. It is more prominent in males than in females aging fifty to sixty years.

Causes: The exact etiological factor is not yet known for the development of lichen. However, genetic and environmental factors may be responsible for this skin condition. Excessive scratching and constant friction between the skin (Kobner’s phenomenon) is known to cause lichen in patients. These factors often damage the epidermis of the skin thereby exposing the next layer known as the dermis. Extracellular protein deposits on the upper layer of the dermis known as papillary dermis causing papules and rashes.

Lichen is often associated with pruritus (severe itching) with hyperkeratotic hyper-pigmented rashes predominantly seen on the shin of the lower leg.

Lesions consist of scaly papules (multiple raised spots), mostly red or brown in color, which can merge together to form plaques.

The condition is usually accompanied by other skin conditions such as atopic dermatitis, and fungal infections.

In a few cases, there can be bleeding involved due to excessive scratching of the skin and lesions may be painful.

Diagnosis: Skin biopsy and the histological investigation is usually suggested when suspected with lichen.

Treatment: The conventional treatment usually consists of corticosteroid creams, dermabrasion and in severe cases excision of the individual lesion, however, recurrence is common. Antihistamines reduce the itching but prolonged use of such medicines is not recommended.

The scope of homeopathy in Lichen Amyloidosis:

Homeopathy has a good scope in treating Lichen planus. As the disease has a tendency to spread; the aim is to control further progress of the disease and pathology. Homeopathic medicines aim at healing the patient from within by boosting and correcting the immunity. Treating the underlying cause is equally important. Homeopathic medicines have the power to control the inflammatory process thereby reducing itching, burning and any further spread of the lichen spots. Dependency or the need for conventional medicines can be reduced. One should opt for homeopathy at the earliest for a speedy recovery. Lichen planus is a chronic disease and takes its own time for recovery; hence a long-term treatment is usually suggested to patients.

Self-care: As friction is known to cause amyloidosis and can aggravate the condition; any scratching and rubbing of the skin should be strictly avoided as far as possible.