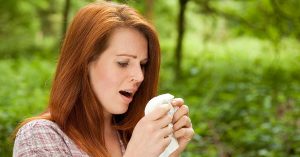 Allergic rhinitis or hay fever refers to a set of symptoms arising from the inflammation of nasal mucous membranes as a response to the overreaction of the immune system to allergens. An allergen is any substance that triggers a hyperactive reaction in a susceptible person while being completely harmless in another person. When an allergic person comes into contact with an allergen, his/her immune system wrongly perceives it to be a threat and sets off an exaggerated immune response towards it. It reacts by releasing inflammatory chemicals like histamines into the bloodstream. Homeopathic medicines for allergic rhinitis work to moderate the immune system and prevent these reactions.