A gout is a form of arthritis which is caused by the accumulation of uric acid crystals in joints. In this condition, due to a metabolic dysfunction, there is deposition of uric acid in and around the joints causing severe painfulness, swelling and restricted mobility of the affected joint.

The underlying cause of gout is a disturbance in Purine metabolism of the body. Purine is a substance found plenty in the living cells as well as in many food articles. Uric acid is a body waste product, which is produced in the body after the breakdown of Purine. Under-excretion of uric acid through the kidneys and large intestines or excess formation of uric acid due to certain factors (such as alcohol, lack of physical activity, crash diet, meat, etc.) leads to accumulation of excess uric acid in the blood, eventually leading to Gout. The exact cause for the underexcretion remains unknown in many cases, and it is believed to be more genetically determined. 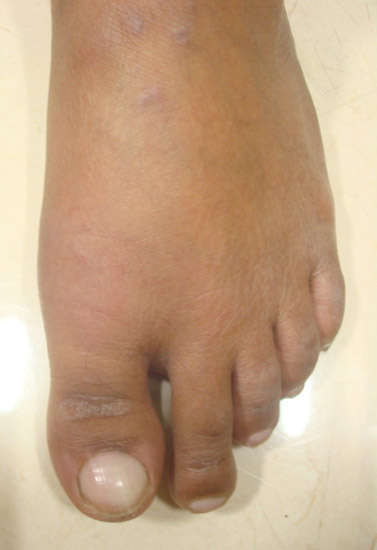 Gout is an intensely painful condition, which mostly affects only one joint (monoarthritis) at a time, most commonly the big toe. However, Gout may also affect the elbows, knees, ankles, wrists or small joints of the hands and feet. The classic history in a patient suffering from Gout is of excruciating and sudden pain, swelling, redness, warmth, and stiffness of the joint. The low-grade fever may also be present. The skin overlying the joint can also be swollen, tender and sore if it is touched even lightly. Patients with longstanding hyperuricemia (high levels of uric acid in the blood) can have uric acid crystal deposits called tophi in other tissues as well, e.g. the helix of the ear.